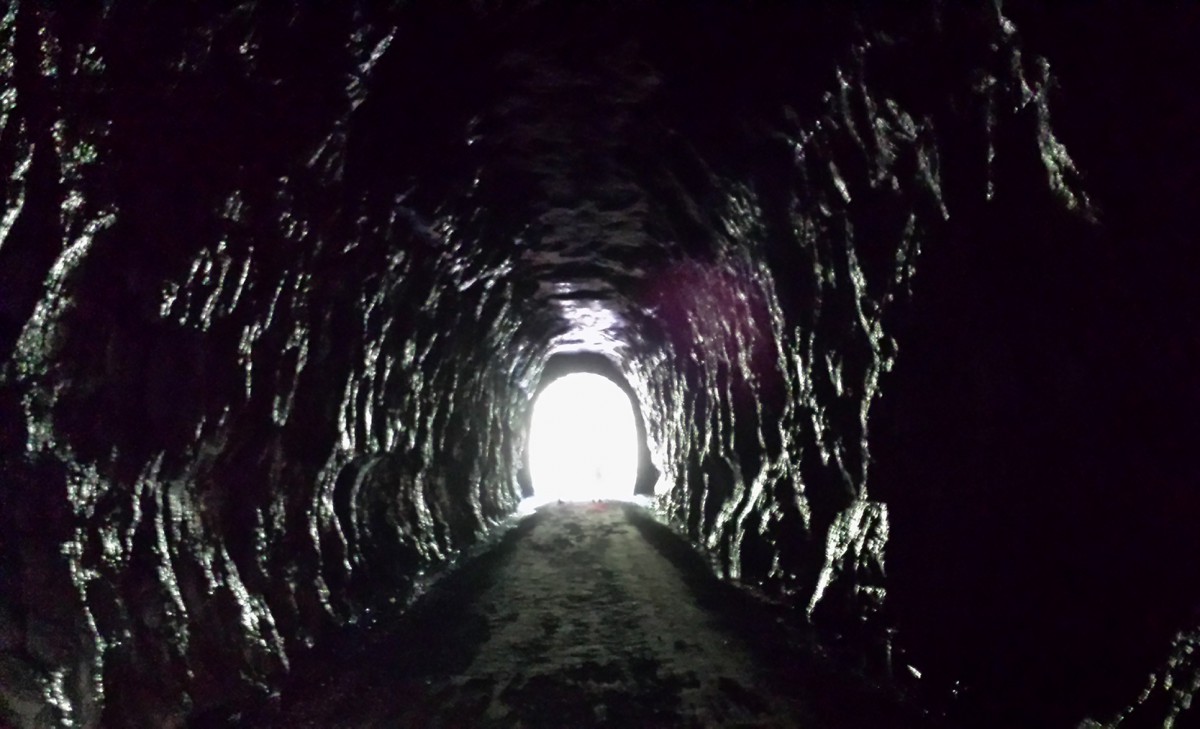 Wisconsin Bikes: All Aboard the Elroy-Sparta State Trail

The Elroy-Sparta Trail is the crown jewel of cycling in Wisconsin. About 32 miles of crushed limestone trail stretches between the two small Wisconsin towns on an old railway line. The ride not only features some amazing views, but there are also minutes of sheer darkness while you walk your bikes through long railroad tunnels.

My friends and I threw our bikes on the rack and drove to Elroy, about an hour and half from Madison. We parked at the Kendall Depot which is well prepared for visiting cyclists with a shop, washroom and even showers. 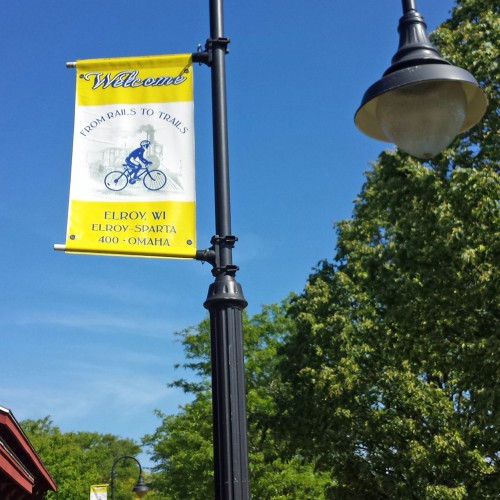 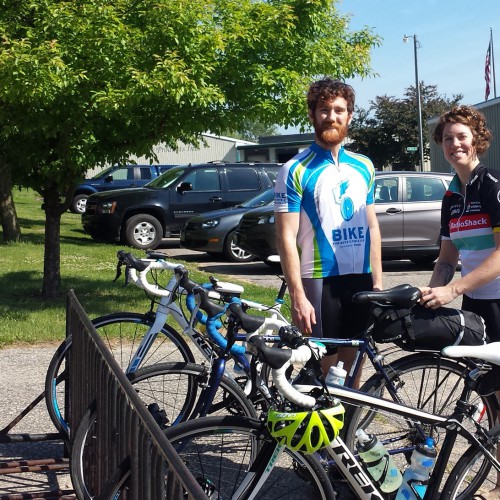 All three of us had brought our skinny-tire road bikes. Despite the fact that the trail is crushed limestone, it was pretty firm — more like hard-packed dirt than loose small rocks. If the trail was soft due recent rains or the spring thaw, I would have chosen a bike with thicker tires.

The Elroy-Sparta Trail website boasts that it is  “America’s first Rails to Trails project.” Rails to Trails is a national movement to convert abandoned rail lines into usable parks and trails. It makes a lot of sense. These natural trails now connect communities through outdoor recreation much like the railroads did with commerce in years past. The Elroy-Sparta trail is not only a great place for cycling and hiking in the summer, but it’s open to snowmobiles in the winter. 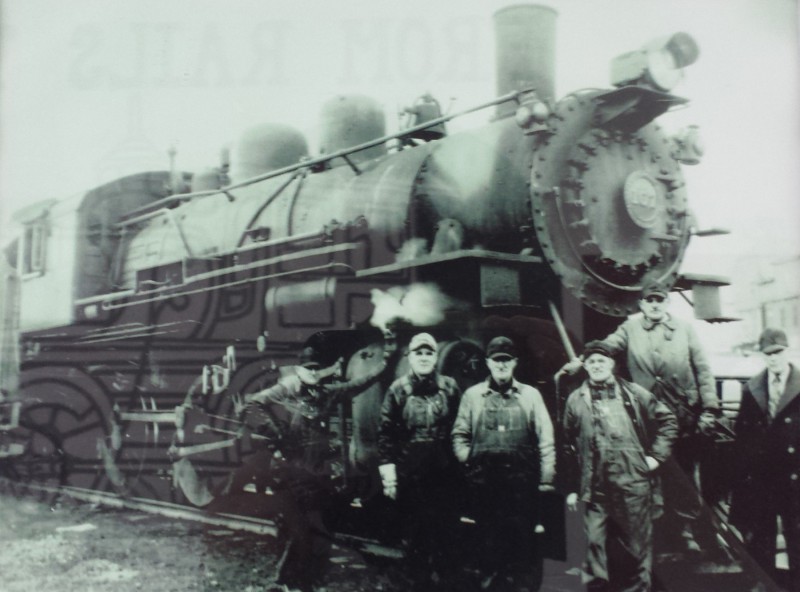 The thing that differentiates a rail trail to any many cycling experiences in Wisconsin is the grade. Steep inclines and descents have been smoothed over by engineers to create a steady grade that the massive trains could handle. This corner of the state is actually pretty hilly, which means that instead of short, steep climbs on the road the rail trail offers long, gradual climbs. On the flip side, it also means that you rarely stop pedaling for a downhill.

What sets the Elroy-Sparta Trail apart from the other rail trails in the state are the three long railroad tunnels along the trail. These tunnels are difficult to put into words and really need to be experienced first hand. I had heard that it was recommended to walk bikes through the tunnels, but kind of thought we’d ride through them anyway. However upon seeing the first tunnel, it was clear that, yes, we should definitely walk our bikes.

First, moving from the bright sunlight into the extreme darkness makes it even harder to see than I anticipated. It would be easy to ride up on someone without seeing them. Second, the tunnel floor is often rocky, wet and rutted — pretty dicey to ride on. 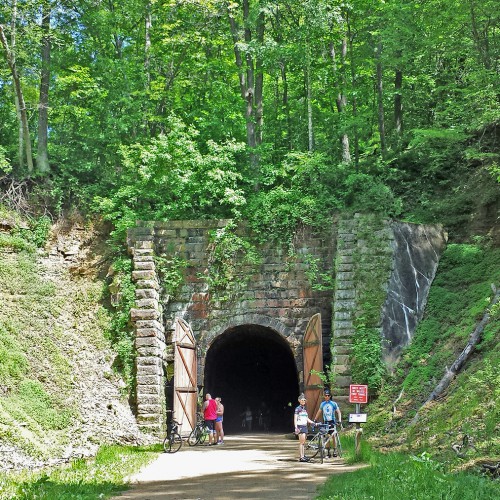 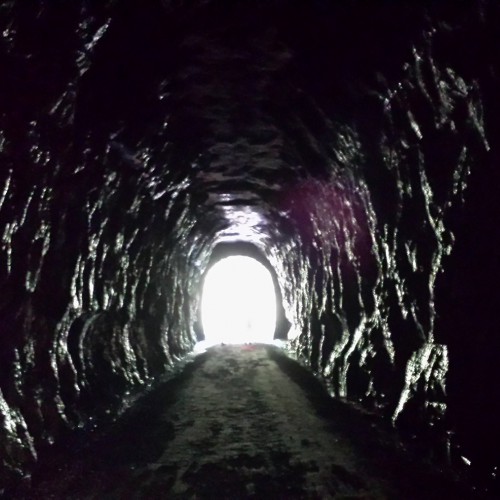 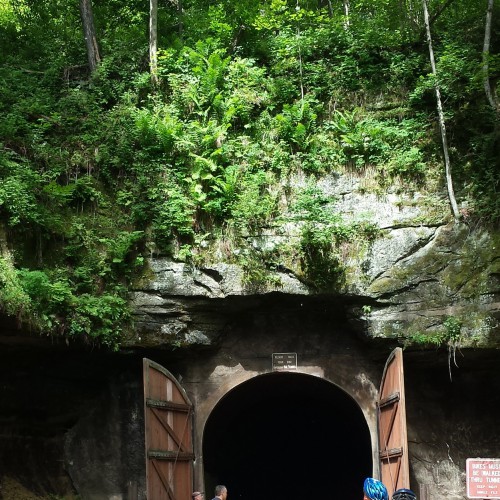 Last, it turns out that walking for 10-15 minutes during a long day of cycling is the perfect way to stretch the legs out. Just consider it active recovery. I think all of the tunnels are on the top of long low-grade hills — particularly the one closest to Sparta. Here I was more than happy to jump off my bike and stretch my legs out while we walked the nearly mile-long tunnel. By the time we jumped back on our bikes, I felt relaxed and refreshed. Even better, the path after the tunnel was downhill for a long stretch.

The tunnels are wet and dark and it’s probably a good idea to pack a rain jacket or even an umbrella. The tunnel nearest Sparta was built under a natural spring, so there are streams of water falling from the ceiling. I was really happy that we had our bike lights, both the red flasher on the back to alert those behind us and the bright white lights in front to guide our way.

Along the trail, we saw beautiful scenery including rolling hills, marshes, prairies, farmland and forests. As we rode, a pair of sandhill cranes flew overhead and we heard many other songbirds. 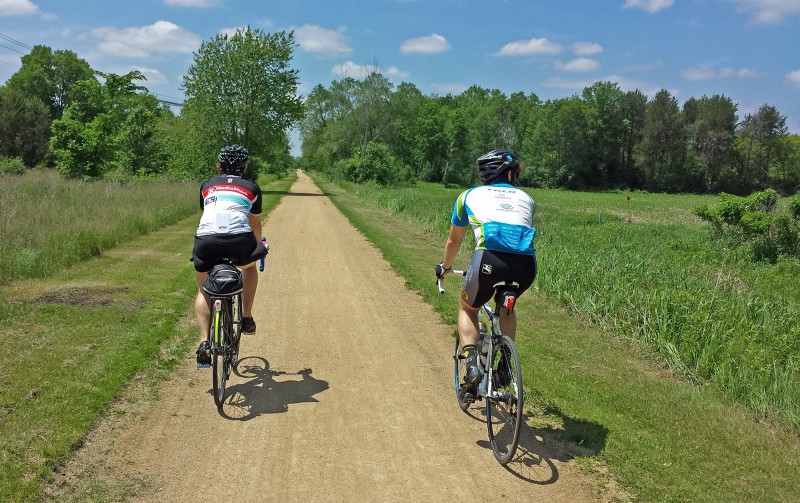 The best thing about this trail is how the communities along the trail welcome cyclists with open arms. As we traveled through several small towns, we noticed that many small businesses had bike racks and there were even some advertisements near the trail for places to camp or eat. It was easy to find a spot to fill up water bottles or use a restroom along the way. We even passed some bed and breakfasts along the trail which looked like great destinations.

The communities along the trail were celebrating the trail’s 50th anniversary the day we rode. Each community had a number of riders wearing t-shirts to signify where they rode from. There were lots of people out, but with a trail this long, it rarely felt crowded.

Near one of the tunnels, my friend had a mechanical issue with his bike cleat, which meant he couldn’t remove his shoe from the pedal, which also meant that he had to walk through the wet tunnel without a shoe. He took it in stride and walked with a plastic bag over his sock for a while before eventually just going barefoot. 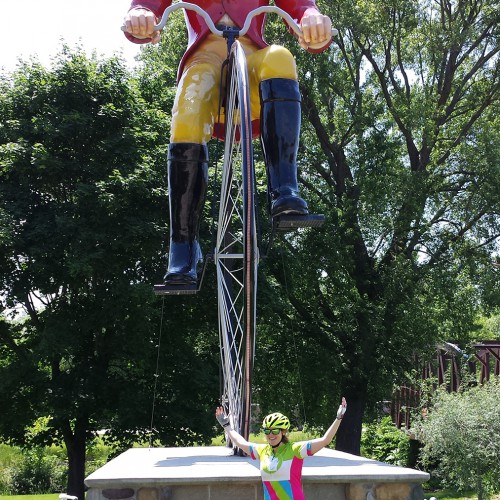 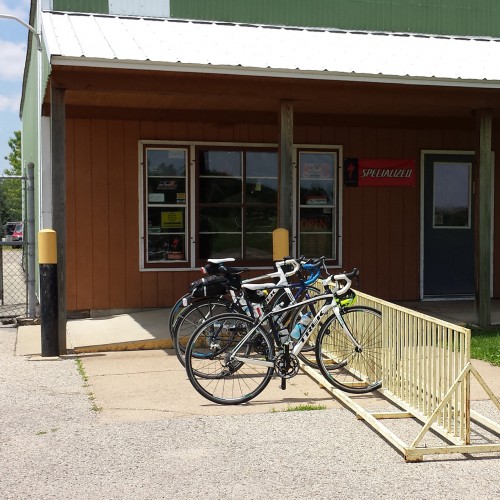 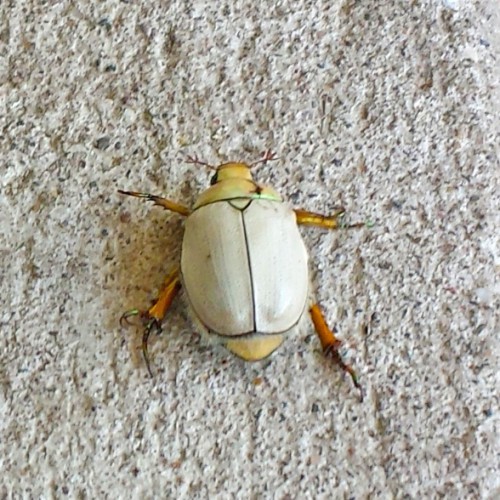 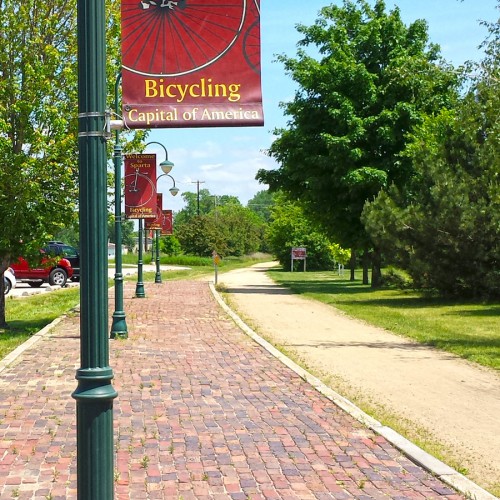 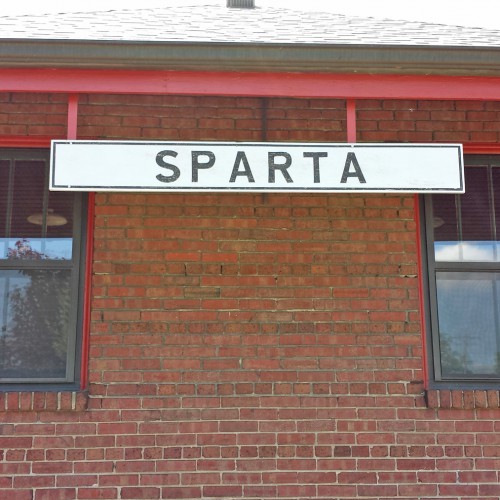 When we arrived in Sparta, we were thrilled to see Speed’s Bicycle and Electric Motor. They were awesome and had the parts and skills to fix the cleat right away, making the walks through the tunnels on the way home way more enjoyable for my friend.

The trail ends at a visitor center in Sparta, which was a great place to take a lunch break and wash up. My friend had heard about the giant bike statue a little farther in town, so we biked another mile in to see it. It’s 32 feet tall. Definitely worth the trip.

On the way back to Elroy, my legs started feeling pretty tired around mile 60, also a headwind had picked up. We took a couple of stops to stretch out at stop signs and powered through.

The entire trip took us about 7.5 total hours including biking the trail, walking the tunnels and spending time in Sparta at the bike shop, giant statue and depot.

When we got back to the car, we were hoping to find something to eat in Elroy, but the town had shut down by 6 p.m. so we stopped in Wisconsin Dells on the way home for an entirely different type of tourism experience. Also, after riding 70 miles in one day, it seemed appropriate to buy some fudge. Calories replenished.

The Elroy-Sparta Trail is part of the Wisconsin State Parks system, so trail passes are required. If you live in Wisconsin, the annual pass is a great idea because it can be used on many trails throughout the state for both cycling and cross country skiing. It’s also part of a larger trail system that stretches from Wisconsin Dells to La Crosse — through some of the prettiest land in Wisconsin.

I think I see a longer bike ride with some camping gear in my future. 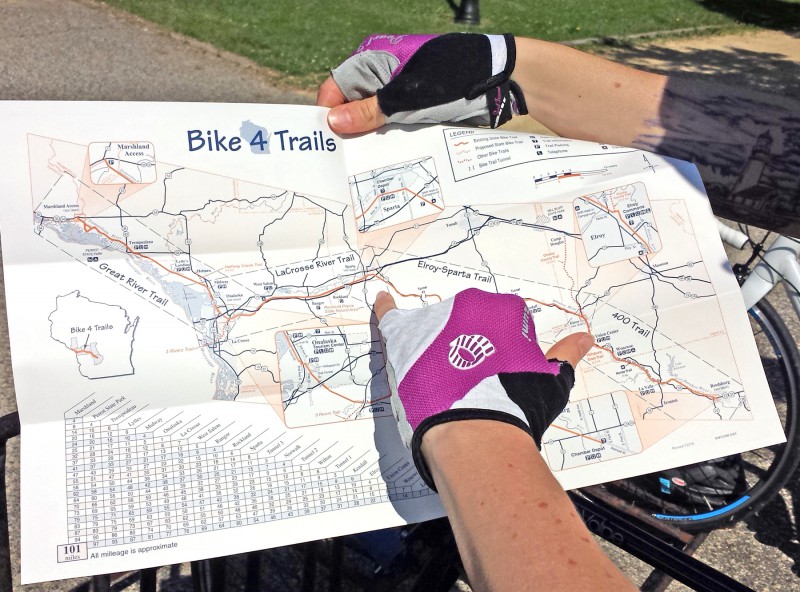 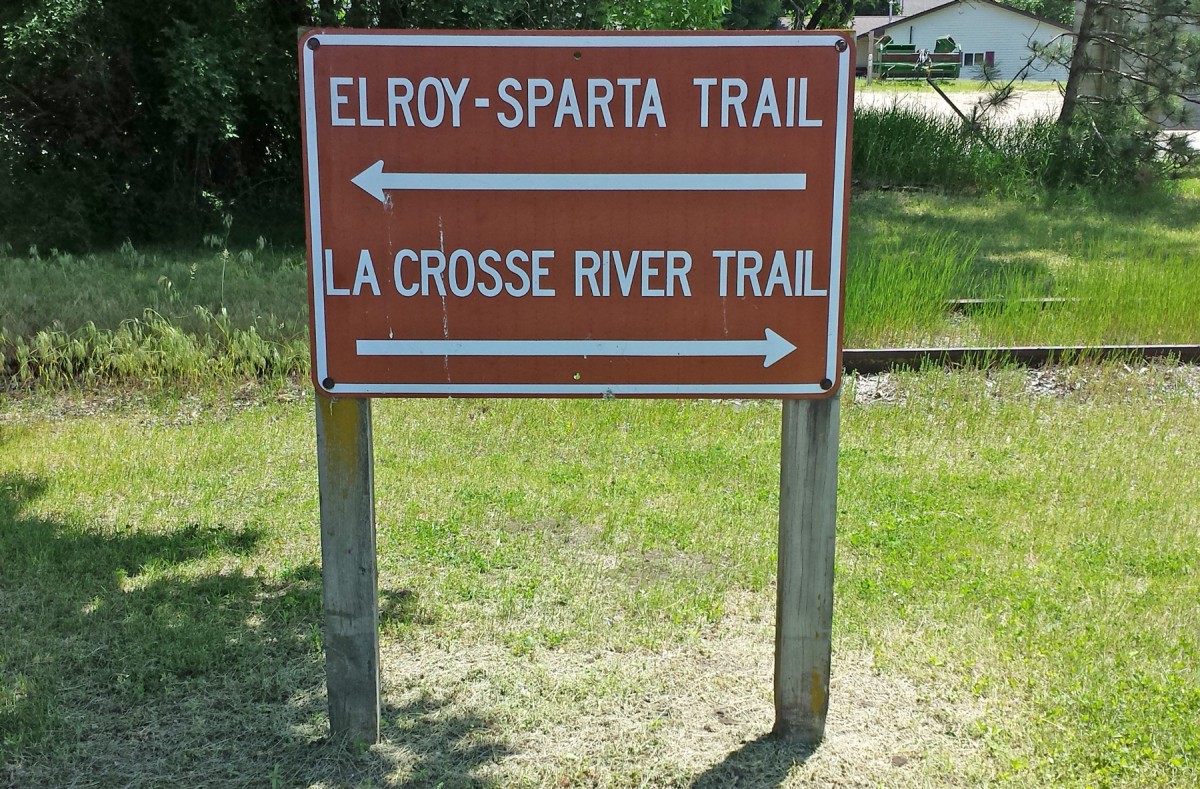 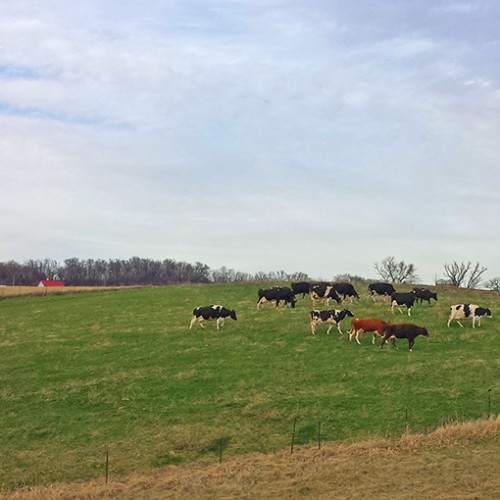 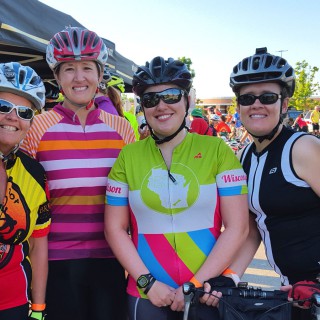